Burton Leonard Lime Quarries Nature . The primary aim of re-introduction of grazing onto the site was to manage the grassland in a more traditional way benefitting many of the species within the reserve and also helping to control burnet rose and scrub encroachment on the limestone grassland. In the absence of sheep-grazing, the grasslands have become dominated in places by ash and hawthorn saplings and by burnet rose. The latter plant, though interesting in its own right, can take over large patches of ground, out-competing other species.

The hebridean sheep worked well within the grassland areas, however having assessed the grassland at the end of the grazing period we have decided to bring sheep onto the site in early October this year while more palatable vegetation remains on site. This will allow the grazing to have a greater impact the grassland especially the burnet rose.

The traditional management technique of coppicing has also been re-introduced within the reserve to manage the areas of limestone scrub which are an important feature of the site. Sections of scrub will be cut on rotation and then allowed to re-grow. This management will increase the structural diversity of the scrub, benefitting many of the plant, invertebrate and bird species that use the site. Although this work can seem quite severe particularly at the start of the spring, by mid summer most of the cut stumps will have a vigorous growth of new shoots and by the end of the second year after cutting will have filled out.

A full year of butterfly surveying was again successfully completed in 2011, with a maximum of fifty one individuals being identified during a survey in mid July. Grassland species such as, meadow brown and ringlet butterflies were particularly abundant within the site, but speckled wood were also present which prefer the woodland edge and dappled shade within the scrub areas. The results from the surveys will feed into the national Butterfly Monitoring Scheme, which helps to inform the Government and other national bodies on the health of the environment as well as informing site management. The survey work was only made possible through the hard work and dedication of survey volunteers to which we are very grateful.

Sadly, while many of the visitors to the reserve use it responsibly, we have had some problems recently with mountain bikes using the reserve, with a number of dirt ramps being constructed along the paths and down some of the banks. Having removed the jumps and made the paths safe, we have reluctantly locked the field gates into the reserve which we hope will deter further damage to the delicate habitats which make this site so special. The kissing gates into the reserve of still fully accessible and we hope that this does not reduce anyone’s enjoyment of the site and its fantastic wildlife.

Please note that the gates will be locked and that dogs must be kept on leads. 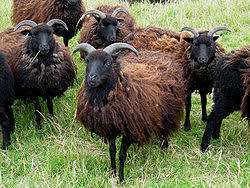 Two banks of limestone grassland are remnants from before Mickle Hill was quarried, with younger grassland having developed in the quarry base after quarrying ceased. The older grasslands developed within the context of a traditional sheep grazing regime, similar to that which the Trust is now going to re-introduce. Amongst the fantastic array of lime-loving plants found here are rockrose, purple-flowered and wonderfully scented thyme, delicate white burnet saxifrage, aromatic wild basil, pyramidal orchid, twayblade and the small spiky carline thistle. Rarities include squinancywort, yellowwort and rare spring sedge. In the absence of sheep-grazing, however, the grasslands have become dominated in places by ash and hawthorn saplings, and by burnet rose. The latter plant, though interesting in its own right, takes over large patches of ground, out-competing other species. The Trust has been managing the banks for years by cutting and raking. However, this is not having the desired effect of controlling the woody species.  Grazing with the Trust’s Hebridean sheep in winter should keep the growth of scrub in the grasslands in check, making them more species-rich.

You may have noticed that our volunteers have been doing lots of scrub clearance in the southern quarry, with the aim of linking the two grassy banks with an open grassy area through the quarry floor. This aim is now nearly complete. However, we do not wish to remove all the scrub from the reserve, since it is important in its own right, supporting birds, mammals, butterflies, and some nice ground-flora, such as bluebells, primroses and sanicle. The scrub contains a good variety of species, including buckthorn and areas of coppiced hazel as well as the more familiar and widespread hawthorn. During the active period of lime-burning in the quarry, this scrub was coppiced to stoke the kilns.  The Trust is re-introducing this traditional, long-rotation coppice management, in order to prevent the area developing into ash woodland, which is more widespread, and a less valuable habitat than the species-rich scrub.  The northern quarry area will, however, be kept as a non-intervention area, with tall ash woodland left to continue to develop naturally.

2010 saw the setting up of a butterfly transect at Burton Leonard, surveyed by Trust volunteers. This is a set route which is walked weekly from April to September, noting butterflies seen within a set distance of the route.  The transect is one of only 20 monitored in the whole of Yorkshire. The results are enormously valuable. They inform site management, for example this year we realised that white-letter hairstreaks use the elms on the reserve, which will be retained in any areas cleared of scrub.  Similarly, brimstone butterfly rely on the buckthorn here. The sheltered southern quarry floor provides the perfect micro-climate and habitat for butterflies, now that it has been cleared of trees and scrub. The results also feed into the national Butterfly Monitoring Scheme, which helps to inform the Government and other national bodies on the health of the environment. This year we hope to continue to monitor the transect, using a team of volunteers who work on a rota system.  Could you help? We really need more volunteer recorders. You don’t need any experience, the recording is only done when the weather is pleasant, and you learn lots about butterflies and the site.  Last year the survey was carried out almost entirely by novice recorders, who thoroughly enjoyed the experience. You only need to commit as much time as you have. Please do get in touch if you think you might be able to help with this, or any other elements of site work.

A recent archaeological survey undertaken at the reserve revealed the remains of six lime kilns of various sizes and states of repair, ranging from well-preserved intact masonry structures to near-destroyed earthwork remains. Also found were the remains of three buildings originally associated with the quarry and lime burning business. Lime kilns were an important facet in the history of the area. Their purpose was to produce quicklime, used to ‘sweeten’ acidic ground, to break up clay soils to finer tilths and to provide vital minerals required by growing crops. The practice of spreading lime is still commonly seen on arable land today. Quicklime was also mixed with water to produced slaked lime, the main ingredient in lime mortar, lime render, plaster and limewash. Other minor industrial uses for lime included tanning and lead smelting. Limestone has to be heated to around 900ºC to produce quicklime (calcium oxide). In lime kilns this was usually achieved by burning the limestone mixed with wood, coal or charcoal for up to five days. Lime burning at Burton Leonard Lime Quarries is thought to have been carried out between 1838 and 1941, when it stopped because of the danger of rising columns of smoke during the war.

What will re-introduction of grazing mean for local residents?

Locals will benefit from the habitats on the reserve becoming even more interesting and because the historical interest of the site will be better preserved and more visible. Dogs will still be allowed, providing that they are kept on a lead, as is the current arrangement. Horses and bikes will not be able to access the fenced area. However, neither of these activities is currently allowed on the reserve, not least because this is set out within the rules governing the Site of Special Scientific Interest. We hope that dinosaur hunting (which, I am reliably informed currently takes place on site) will continue to be practiced by many generations of local children to come! If you have any questions, please get in touch.

All Posts by Category